Zoe Crist identifies himself primarily as an artist. In addition to his innate talents and creative mind, Zoe's determination, hard work and skilled problem-solving, have earned him the uncanny ability to master nearly any craft he sets his mind to.

Zoe was born in Los Angeles, California 42 years ago. As a exuberant child, Zoe rarely feared the unknown. This quality has endured and continues to enable his courageous pursuit of an ever expanding consciousness. It is with a profound desire to share and communicate his soul, that Zoe reaches deep and creates his art. His hope is that his work will resonate with you.

Zoe's passion for forged metals began in 1987 when he stumbled upon a copy of the book, "Decorative & Sculptural Ironwork: Tools, Techniques, & Inspiration", by Dona Z Meilach. And inspired he was! In the years to follow, through in-depth study on his own and long distance apprenticeship and friendship with Don Fogg, an American Bladesmith Society Mastersmith since 1979, Zoe became more and more proficient at forging iron and making Damascus. With proficiency came the self-expression of a fine craftsman. The metal arts, particularly the magical process of damascus creation, continue to be a key medium in which Zoe's artistry flourishes. It is the challenge and excitement surrounding the creation of stunning and unique patterns in steel that continue to capture Zoe's passion.

In the nineties, while knife making remained a hobby, Zoe farmed a 300 acre organic cooperative using a combination of draft horses and machinery. During this time, Zoe also worked to become an expert welder and machinist, studying mostly on his own and taking only a brief apprenticeship. In 2003, Zoe designed and created a state of the art Bio-diesel distiller to power the diesel equipment and trucks for a large farm in Marlinton, West Virginia. The next year, the prestigious Homestead Resort in Hot Springs, Virginia commissioned Zoe to design and manufacture Bio-diesel distillers for fueling their fleet. Along with working with metal and farming, Zoe identifies deeply with music. An identity, perhaps, first instilled during his formal piano training as a boy. Later, in the mid nineties, with a passion for sound creation and exploration, Zoe delved back into music, where he was met with his usual propensity. Zoe expressed his creative self through live performance (drums and keys), mixing, mastering, and recording. Zoe also did Beta testing for Steinberg Software in Germany and Waves Digital Audio in Israel for nearly 15 years.

Across the years, Zoe's obsession with manipulating patterns within steel through fire and anvil stayed foremost in his psyche. And in 2009, with the help of his wife, Shio Crist, Zoe turned his knifemaking and Damascus hobby into a profession. Also in early 2010 Zoe was afforded the opportuniy to study with his longtime friend and mentor Don Fogg. Zoe currently produces beautiful damascus steel for custom knifemakers, as well as companies, including William Henry Studios and Pro Tech Knives. He now resides in the Upper Peninsula of Michigan with his wife and two young boys, Layne and Asher. 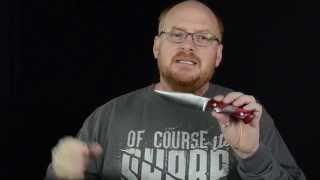 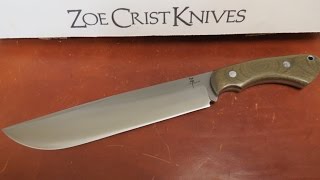